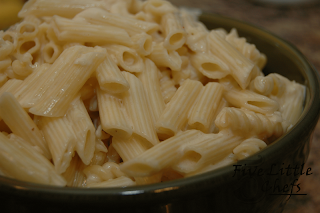 It is Giada day again. We were talking about taking a vacation somewhere. The conversation turned to talking about going somewhere that has something to do with cooking. Little Chef A said “Giada lives in California, we could go there!” I’m pretty sure her thought was let’s go to Giada’s house, meet her and my dream will be fulfilled. I had to tell her that was not possible.
Little Chef A is chose to make Fettuccine Alfredo. If we made the recipe as stated we would have had A LOT left over so we decided to half the recipe. (We still had leftovers which they all enjoyed the next day!)  I explained this is a recipe that goes quick, so she had to be prepared. We opted to use what we had on hand, which meant no lemon. Also, we don’t very often use spaghetti or fettuccine noodles because they are too hard for the Little Chefs to eat. We opted for penne instead. 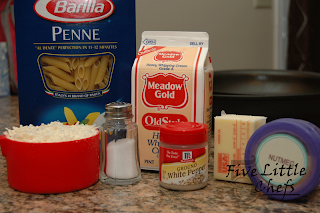 The pasta was poured into a pot of boiling water which she salted.

When time was up she lifted the saucepan herself and dumped it into a colander in the sink. The steam this time did not scare her and she did it with ease. Next she dumped the pasta, now in the colander, back into the pan.

The sauce was simple. Little Chef A measured out then poured the heavy cream into a skillet.

Next she added the butter until it melted.

She very carefully added the cooked pasta to the cream and butter.

She added in the rest of the cream and the parmesan cheese.

The nutmeg, salt and white pepper. She wasn’t sure how to measure out the salt and pepper that didn’t have an actual measurement. I advised her to shake some into the palm of her hand. When she decided how much she wanted to put in then she could dump it in. If she poured too much in her hand she could dump it out before ruining the meal.

Now she needed to wait for another minute for the sauce to thicken.

Little Chef C asked for the pasta to be passed, very nicely, so she could have more. On the way Little Chef A’s lemonade spilled, mostly on her plate and mixed with her pasta! (Little Chef A does NOT mix foods. In fact she only eats one food at a time then moves to the next one.) She was so distraught, tears were starting to form. I said remember, the recipe actually called for lemon juice and lemon zest so take a bite and tell me how it tastes.  She started to laugh. Crisis averted! She daringly took a bite and really really wanted to spit it out, “YUCK” she said. I replied, “Now you know. It is a good thing we didn’t put lemon in it.” Yes, I do realize it would not taste exactly the same, but it stopped the tears and created some laughs!

Cook the pasta in a large pot of boiling salted water until tender but still firm to the bite, stirring occasionally, about 4 minutes. Drain.

Stir 2 cups of the cream and the lemon juice in a heavy large skillet to blend. Add the butter and cook over medium heat just until the butter melts, stirring occasionally, about 3 minutes. Remove from the heat.
Add the pasta and toss. Add the remaining 1/2 cup of cream, and Parmesan to the cream sauce in the skillet. Add the lemon zest, nutmeg, salt, and white pepper. Toss the pasta mixture over low heat until the sauce thickens slightly, about 1 minute.

No Replies to "Fettuccine Alfredo"