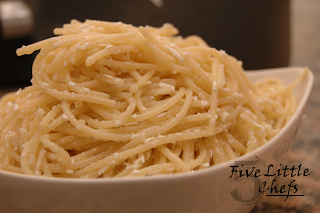 I love recipes with very little ingredients, especially when we are pressed for time and need to eat and run. I really believed this time I would be right and it would not take very long to complete this recipe. Amazingly because of how this recipe is put together we did it! 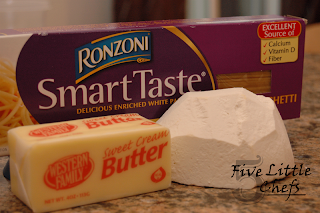 Little Chef D was so excited to make this recipe she stopped participating in the ‘show’ she was putting on with her sisters and grated the cheese in her ballet outfit. It was pretty difficult for her to hold the container with one hand while moving the cheese back and forth with the other hand. She was constantly adjusting her hands and angle trying to find the most comfortable position, but never did. “I wanna see.” she kept saying. She wanted to open the ‘lid’ and see how much cheese she had in the bowl section. Little Chef  would then grate a little more and say, “I wanna see.” It took a while to grate all that was needed when she was stopping so often!

When she was done she looked down and said, “There is so much on the counter.”  Yes that is true, we always have a mess on the counter! 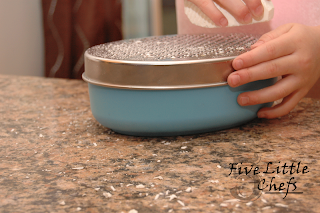 Little Chef D was so surprised the water was boiling. She said, “It has bubbles.” Then salted the water and dropped in the pasta. Almost all of it landed in the pot surprisingly. “I just want to see if it (the steam) is hot or cold” Little Chef D said as she put her hand in and out of the steam. For five minutes she repeated this action saying, “This is hot! The pasta is.” 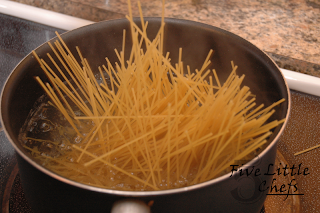 Little Chef D unwrapped a cube of butter and let it drop in another saucepan. It doesn’t look like it would land in the pan, but it did. 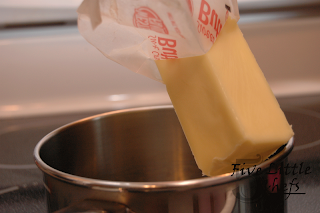 She was watching and waiting for the butter to melt. After a couple minutes of waiting she went in the other room to put on a ‘show’ with her sisters. When she came back she looked in the saucepan and said, “Mom! Look at the butter! It’s melt!” “Yes it is,” I replied. “I knew it.” she said.  I showed her how to skim off the top of the butter. She tried it a couple times then said, “Mom this is too hard, you do it.” 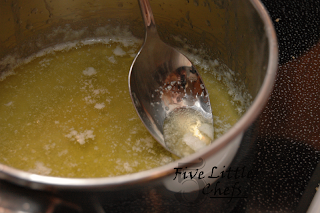 With the help of Dad, Little Chef D was able to pour the now done spaghetti noodles in a collander, then back into the saucepan. Because of her previous experience with the steam that didn’t scare her at all. 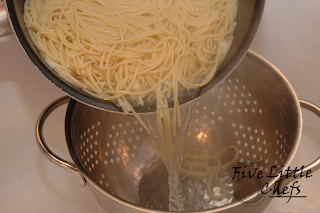 She then poured the butter over the pasta and stirred it the best she could. 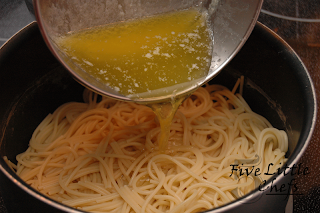 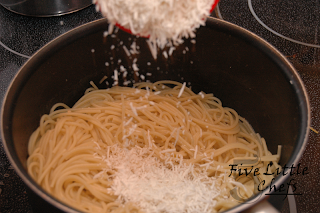 Dinner was ready, the table was set and Little Chef D was able to eat out of the “pretty bowl” as my Little Chefs call it. I asked how everyone liked it. After everyone raised their hands Little Chef A said, “I just wish it had a bit more flavorings.” She immediately went to the cupboard and got brought back some salt and pepper. She sprinkled a little on her pasta and tried it again. “Much better” she said. Of course because she did this Little Chef C and Little Chef D had to do the exact same thing! Sorry, but the recipe did not call for salt and pepper. I am fine with them doing this at home, I just hope they don’t do it when we are eating somewhere else! I’m sure that will happen one of these days. I have too many Little Chefs for it to not happen. Perhaps I should apologize in advance. Sorry!