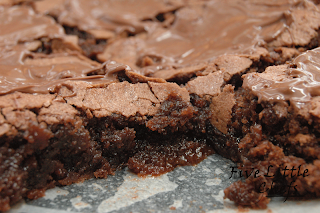 Little Chef D was ready to make another recipe with nutella. This time the nutella was not inside the batter it was melted and poured on top of the cooked brownie. We LOVE brownies, so we have high expectations for each new recipe. 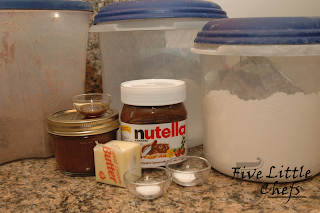 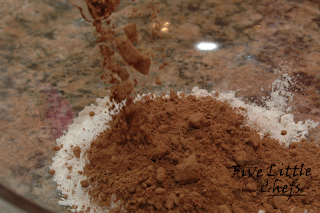 She whisked all these ingredients together. Little Chef D cannot make ANYTHING without getting something ALL over the counter! This time she whisked too hard and it flew out of the bowl.

In a mixer she added the sugar and butter. She was SO excited to push the on/off button to cream the two together.

When we got to this point in the mixing she thought it was so funny it looked like it was stuck. “We need to get the butter out of the mixing thing, then we can stop it.” I helped her scrape the butter out then she turned the mixer up higher. “I know to push the arrow to make it go fast” she said. 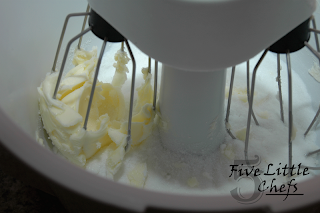 When Little Chef D cracked the eggs it was an experience as usual! She poked her thumbs into the eggs and pulled them apart. The first one was fine. When she poked the second hole she only pulled open a small part of the shell. She said, “It’s like a bee cave. When this one didn’t come out then it was kind of like a bee cave.” Then she repeated the same thing to her sisters after she did a little dance and sang, “I cracked my eggs all by myself, I cracked my eggs all by myself.” 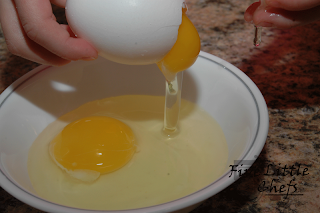 After washing her hands she added the eggs into the mixer one at a time while the mixer was running. 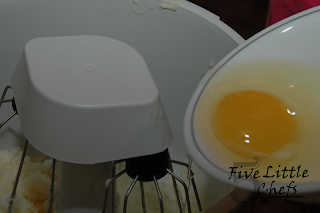 Next she added the vanilla. As you can see in the picture I was holding my breath hoping all the vanilla would make it into the bowl!

She tried to add in the flour mixture slowly. It was sort of slowly, but in the end it was all combined. 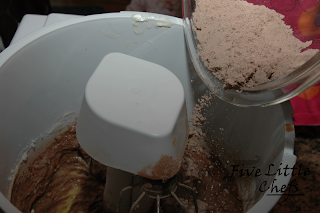 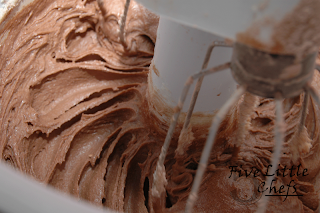 I put the batter into a 9×9 pan covered in parchment and sprayed. It was not easy to spread half the mixture in the pan. There was barely even enough to cover the bottom of the pan. Next some homemade caramel was spread on top of the batter. Then the rest of the batter was spread on top. This was not an easy task so I’m happy Little Chef D let me do it. She would not have been able to do this task herself.  After the brownies were cooked the had to cool fully. The nutella was then spread on the top.  “I have caramel brownies.” Little Chef D said as she did a dance for her sisters. 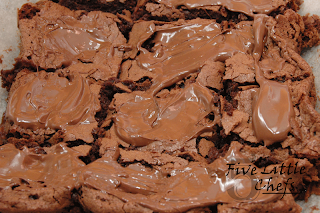 The brownie was very good according to the Little Chefs. Little Chef A said she could not taste the caramel. I agree. If we make this recipe again I would add more caramel and I would leave the nutella off the top.  This recipe is good for little hands to make except for the spreading in the pan part.

What to do:
1. Preheat your oven to 350 degrees. Into a mixing bowl add your flour, baking powder, salt & cocoa powder. Using a whisk, mix together & set aside. 2. Into your stand mixer add the sugar, butter and mix together until creamy. Add in eggs one at a time. Mix well. Add vanilla. GRADUALLY add in your flour mixture until it’s well combined. Batter should be thick & sticky.

3. Spray an ovenproof 10 x 7 dish with cooking spray. Place a piece of parchment paper (slightly larger than your dish to allow for handles) inside. It will adhere to bottom of dish. Spray the top of the parchment paper as well. Take HALF of your brownie batter and smooth it on top of the parchment paper. Take your caramel sauce and pour it on top of brownie mixture covering entire layer of brownie {careful not to place it too close to edges}. Place the remaining brownie batter on top smoothing it out.
4. Bake for 30-40 minutes or until sides are firm and center is no longer giggly.
5.  Allow brownies to cool completely before removing. Cut your brownies to your desired size using a serrated knife. Make a small indentation with your finger into each brownie. Take your melted Nutella and drizzle over the tops of the brownies. Garnish with the hazelnuts.