We bought a lot of fresh vegetables at the store. In our house that usually means Chicken Fajitas for dinner. Little Chef A wanted to help. This recipe has a lot of slicing which is why in the past I’ve made this alone.This is her day to learn how to slice! The first step for Chicken Fajitas is to make the marinate. She needed to squeeze a lime. Little Chef A immediately took the lime and started rolling it on the counter. I asked her how she knew to do that. She replied, “It just popped into my head.” There are too many Little Chefs, I can’t remember which one I taught what! She then cut the lime in half and inserted one into the juicer. She said, “This is the hardest thing ever!…..A ha!” (Some juice finally came out.) “Giada has an electric juicer that is easier then ours. I wish we had hers.” Sorry, I am happy we have this one!

She was leveling off the cumin over and over again trying to get it perfect. I did finally convince her she leveled it well enough she could pour it into the bowl. She has come a long way. At the beginning of the year she was not filling the measuring device entirely thinking that was fine. What an improvement!

The chicken needed to be sliced. She did very well slicing it into very similar sizes. I convinced her it was ok for chicken, or whatever to be stuck temporarily to the knife. It will come off with the next cut. Convincing her of this really saves A LOT of time…believe me!

Little Chef A did a great job slicing the vegetables for the first time. I showed her what needed to be done and she then took over. Shortly after I heard, “I accidently broke an onion.” I realized she did not understand how onions were made. She didn’t break it, the layers came apart. She was VERY relieved.

See how her fingers are holding onto the zucchini. I told her over and over not to do that. I thought she was going to cut herself! Each time she moved her fingers to the proper position then decided it was not comfortable and went back to this position. AHHHH!

Now it is time for the cooking. In a skillet Little Chef A added some oil and then the onions.

After the onions are transparent the peppers were added with some garlic for a few minutes. The chicken and marinate was added next. It is starting to look good!

When the chicken is done the zucchini is added in for a few minutes.

Little Chef C was helping put the plate of tomatoes on the table from the counter. She accidently dropped the entire plate on the floor! After the shock and horror of making a mistake we decided instead of slicing another tomato and splashing tobasco sauce and cilantro over i
t we would just make pico. That was on the docket as well for another day, but now that we are a tomato down we wouldn’t have enough for both so we changed plans.

The tortillas were cooked up and ready to be filled. Sour cream was smeared all over. The vegetable and chicken mixture was next followed by cheese and the now pico de gallo.

Amazingly the mistake of spilling the sliced tomatoes on the floor turned out to be a great thing. We liked the pico de gallo even better! It was easier for the Little Chefs to eat because everything was chopped up. Looks like we have altered this recipe for good. I told Little Chef A we made up our own recipe instead of “copying” a recipe. She was SO excited!!! 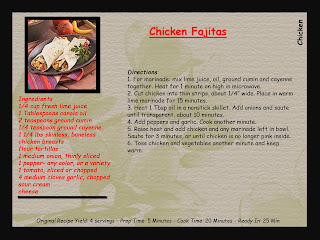