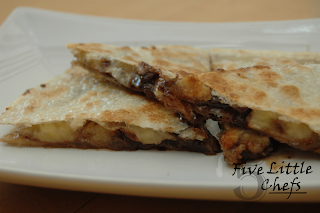 Little Chef D was excited to make HER recipe today. Recently we were shopping and saw Paula Deen’s aprons. Little Chef A said, this is YOUR chef look!  This Dessert Quesadilla looked so good on the Food Network site we just had to make it.
Little Chef D cut the banana with a butter knife. That is the safest for her to use and it was fine because bananas are so soft. I showed her what size to cut them and instructed her to cut them thin, not too fat. With each cut she made she said, “Is this too large?” Sometimes I answered yes, sometimes no. The sizes did vary, but that is what I have come to expect, especially for Little Chef D. 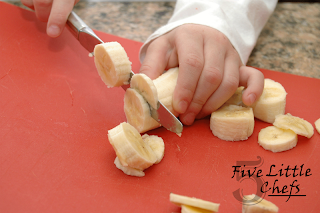 We were using tortillas that need to be cooked. These are a staple in our home so all the Little Chefs know how to cook them. Little Chef D lightly browned both sides of two tortillas. I had made some spreadable butter earlier in the day because we just ran out, she used that on one side of each tortilla. 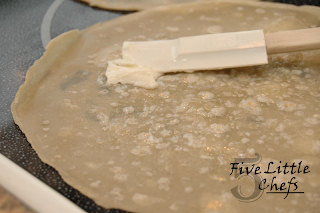 She was very careful in her placement of the bananas on the tortilla. So careful in fact, I turned the heat off, then when it was completely topped turned the heat back on. She loved drizzling the chocolate nutella which we used instead of chips. 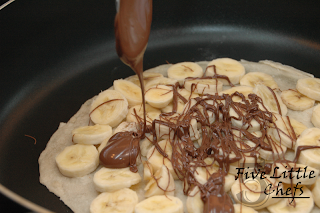 The cinnamon and the brown sugar was then added. Little Chef C measured out the brown sugar. She was having so much fun playing with it, she packed it into the ‘holding bowl’ after it was measured making it difficult for Little Chef D to get it out. 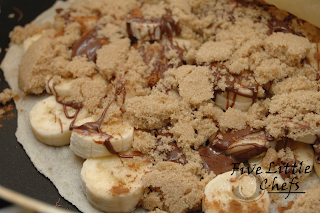 She put the second buttered tortilla on top. I helped her flip it when it when it was ready. 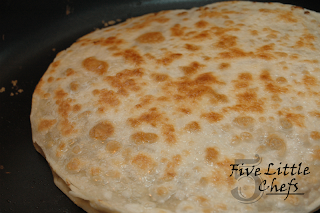 I find it interesting when they say they LOVE something, like this dessert, but don’t want more or don’t want to finish. Little Chef C said, “Can I not finish this? All I taste is bananas and chocolate.” I didn’t quite know how to respond. That is what you should taste! I didn’t hear any other complaints, some wanted a second piece. This one was enough for all of us for an after school snack!

Preheat the grill to medium-high heat. Spray the grill rack with cooking spray.

Brush 1 side of a tortilla with some melted butter. Place the tortilla on the grill, buttered-side down. Arrange the banana slices on the tortilla and top evenly with the chocolate morsels. Sprinkle with the brown sugar and cinnamon. Place the remaining tortilla on top to cover the bananas. Brush with more butter and sprinkle some brown sugar on top. Grill until the chocolate is melted and the bananas are soft, 3 to 4 minutes per side. Cut into wedges and serve with ice cream and caramel sauce, if desired. Serve immediately.