Side Dishes and Vegetables 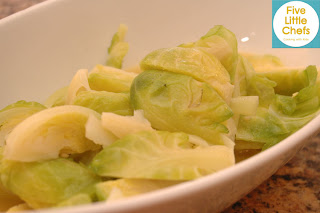 Brussels Sprouts with Dijon Mustard Sauce was a request from Little Chef A. She came home from school recently and said most of the kids in her class hate brussels sprouts. “I don’t know if I like them or not. I haven’t tried them.” I was impressed with her indecision because of her lack of knowledge. We were going to need to do something about that!
Little Chef C found in her Impossible To Easy cookbook by Robert Irvine Brussels Sprouts with Dijon Mustard Sauce. In reading the recipe I laughed because he says, “Brussels sprouts have gotten a bad rap……given a little help, such as that provided by the sauce in this recipe, even the most stalwart sprouts haters may be surprised at how pleasant and flavorful they can be.” It sounded like this would be the best first brussels sprouts recipe.
The recipe really is straight forward. Little Chef C tore off some of the outer layers then she cut them in half. The recipe did not say to cut them, but after reading many brussels sprouts recipes most were cut. For my little eaters it seems easiest to cut all the food small in preparation then when they are starving at the table ready to eat!

The sauce needed to be made next. Little Chef C combined some ingredients in one pan and butter and flour in another. It seemed a little confusing, but if you focus on one pan at a time it is not hard.  Little Chef C smelled the “nutty aroma” then tempered it and poured the flour mixture into the first saucepan.

The brussels sprouts were done steaming by this point and Little Chef C poured the sauce on top. Time to eat! I was hoping for the best when everyone took their first bite. Surprisingly everyone LOVED the brussels sprouts. They kept going back for more and more. After reading the introduction to the recipe I believe the success is because of the recipe. I am so happy! My Little Chefs will try Brussels Sprouts again thanks to this experience!

Method
To make the sauce, combine the stock, garlic, bay leaf, white pepper, and nutmeg in a saucepan over medium heat. In a separate small pan, melt the butter and gradually stir in the flour until it emits a nutty aroma (without  browning). Remove from the heat. Pour a small amount of the hot stock mixture into the flour mixture, stirring until it is thoroughly blended. Return this to the remaining broth mixture and simmer for a few minutes to let the flavors integrate, stirring frequently.

Remove the sauce from the heat, discard the bay leaf, and whisk in the mustard. Season to taste with salt and pepper if needed. Fold the sauce into the steamed brussels sprouts and serve.

That is a pineapple....or is it a mango?